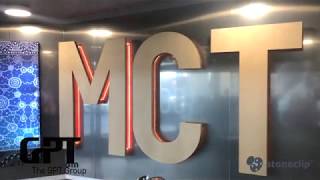 Rodger, Renato and Manny from Stanmor are back overseeing all of the facade stonework. These 3 are a great example of the Stonemason tradition in Melbourne , keeping this skill alive by passing on the traditions of good solid modern masonry.

Their are a lot of people involved in this project @stanmorceramics being the stone contractor charged with the undertaking of the modern and soon to be iconic facade , BamStone form Port Ferry in Victoria supplying the stone which is one of Melbourne most recognised . @cox architecture – the people behind the scenes designing the vision. And Built constructions having facilitated the whole build.

Structurally the whole project has been installed on to a channel sub frame system, with a collection of our 8 mm, 10 mm and 12 mm being used to secure the stones.

The stonework though out this build is of an exceptionally high standard as can be expected from these guys and the whole Stanmor team.

It features undulating walls, various directional changes in orientation of the stone, bed thickness and height changes over courses, a massive feature wall with no room for error, a curved wall section that will impress anyone, that is also complimenting a teared effect on the external facade and featuring a soffit return that acts as a negative capping detail not to mention a real testament to the masons attention to detail.

The guys have used our “dustless” installation system so that they where able to make all of the installation cuts on site safely and not to interrupt the public while they carried on their work. The sequencing that was dictated by Built allowed the whole centre to remain open and not to affect any of the building tenants during the construction phase.

@bamstone has supplied a multitude of different formats of stone as well as radial cut and calibrated stone panels that where used to help dictate the curved wall starting points The Stanmor team has decide on using the 310 epoxy from @Laticrete to help with the reconstruction of the stone and clip.

Another great addition to the Melbourne CBD landscape